YEP, THAT'S RIGHT, IT"S ALL ABOUT ME! 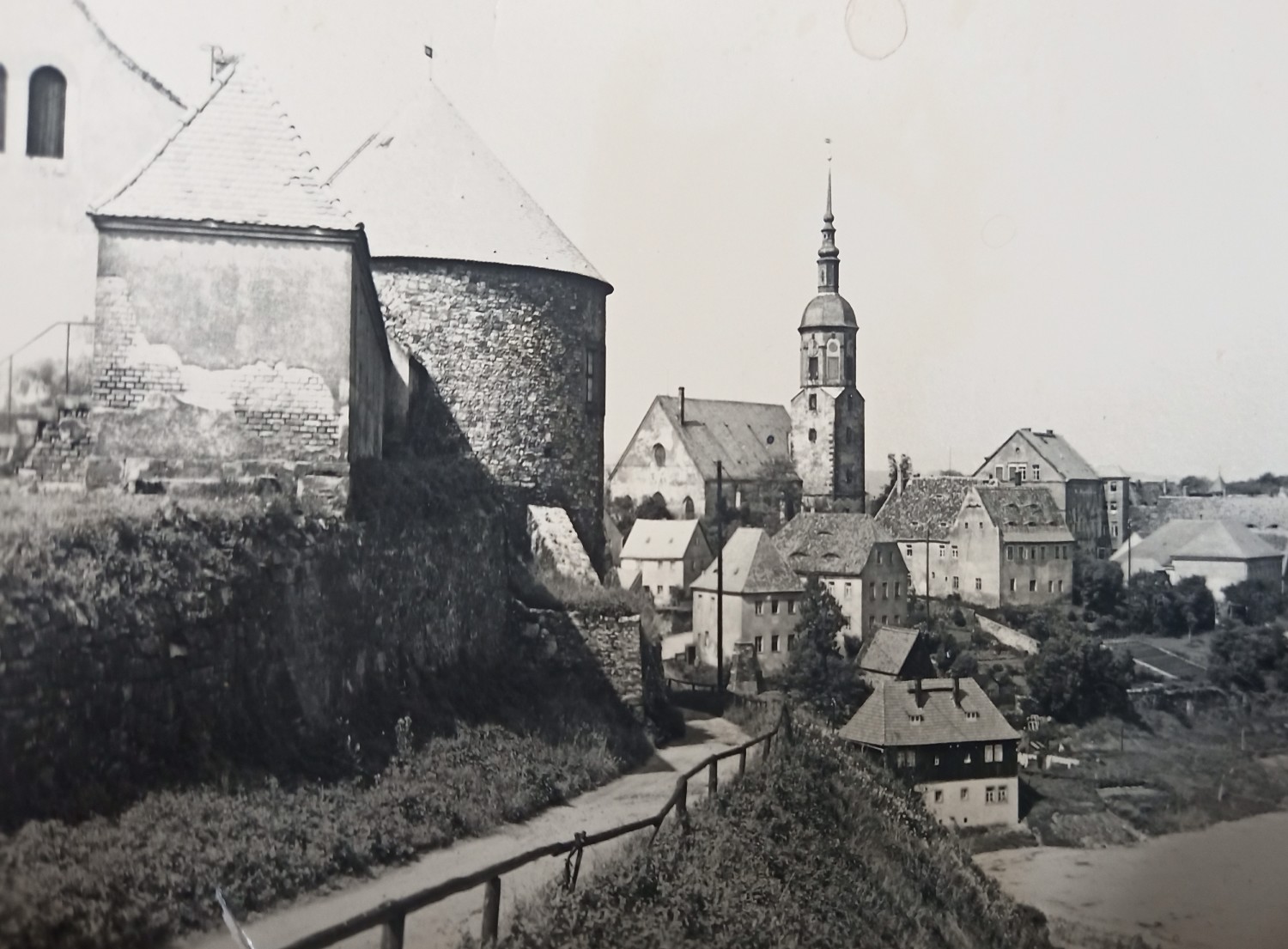 
Josef-Peter Römer/Roemer was born in the German Democratic Republic (DDR) (East Germany) in a small Village called Dohna, in the State of Saxony.  He was living with his Grandmother (Oma) and Grandfather 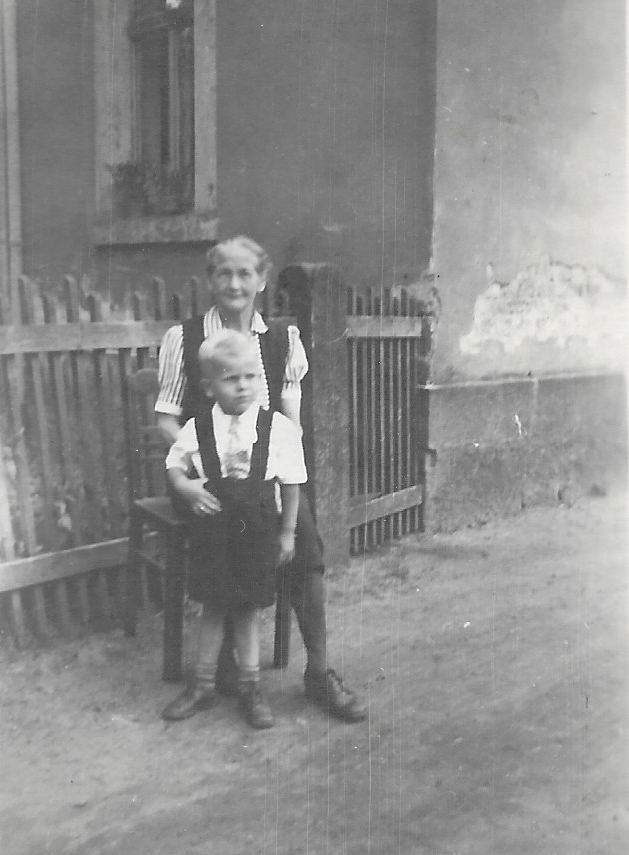 The Artist in 1950 with
his Grandmother (Oma) 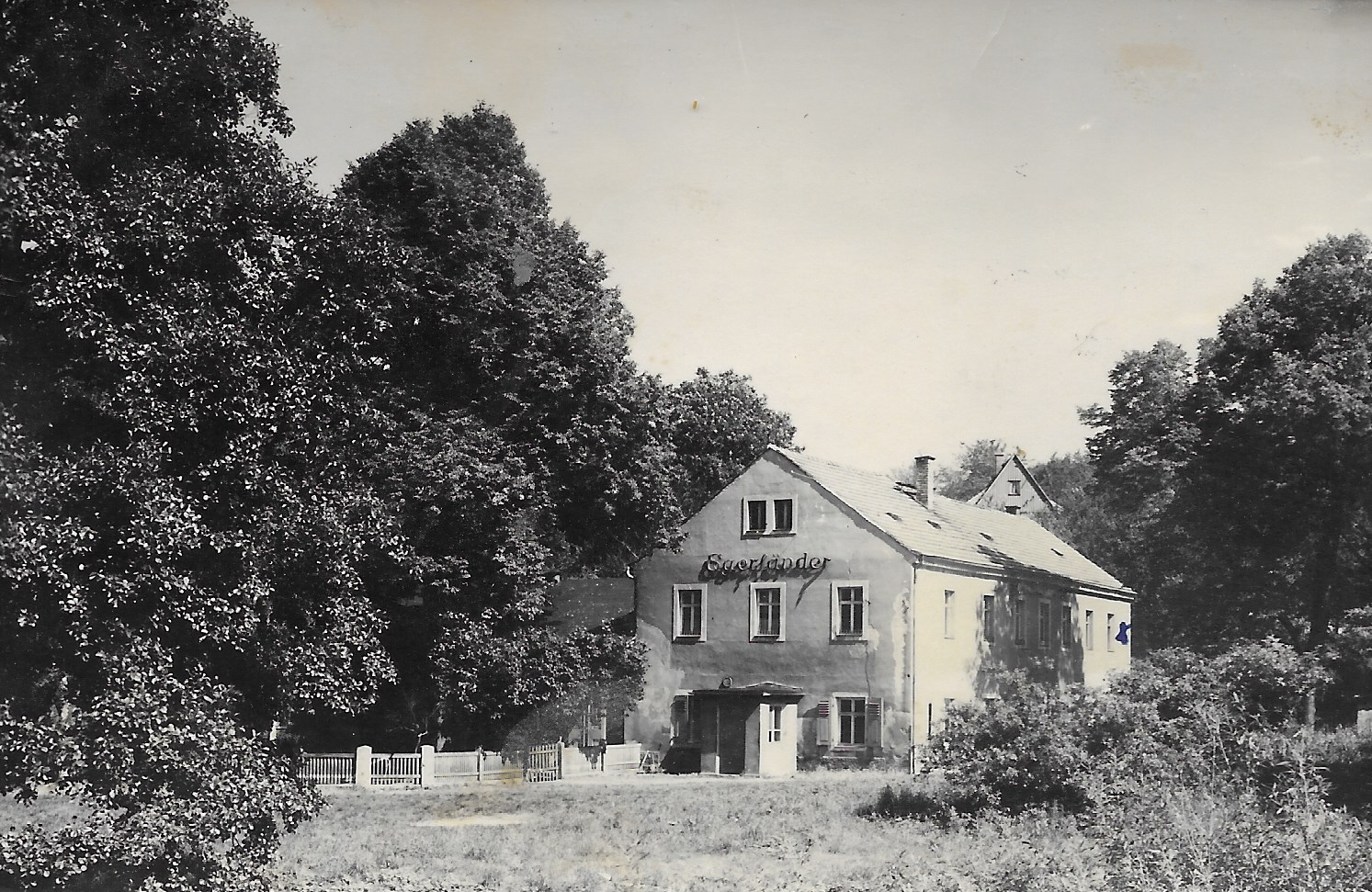 The Photo to the right is the apartment building Josef-Peter Römer lived in, on the upper floor at the end of the building.  The small "X" marks the apartment 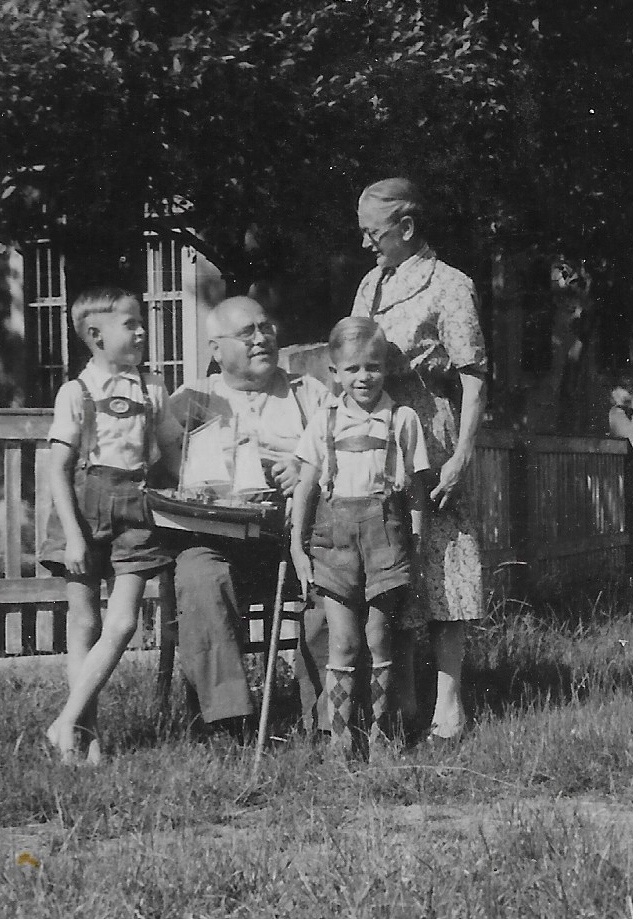 Oma, Opa, Jürgen and the Artist 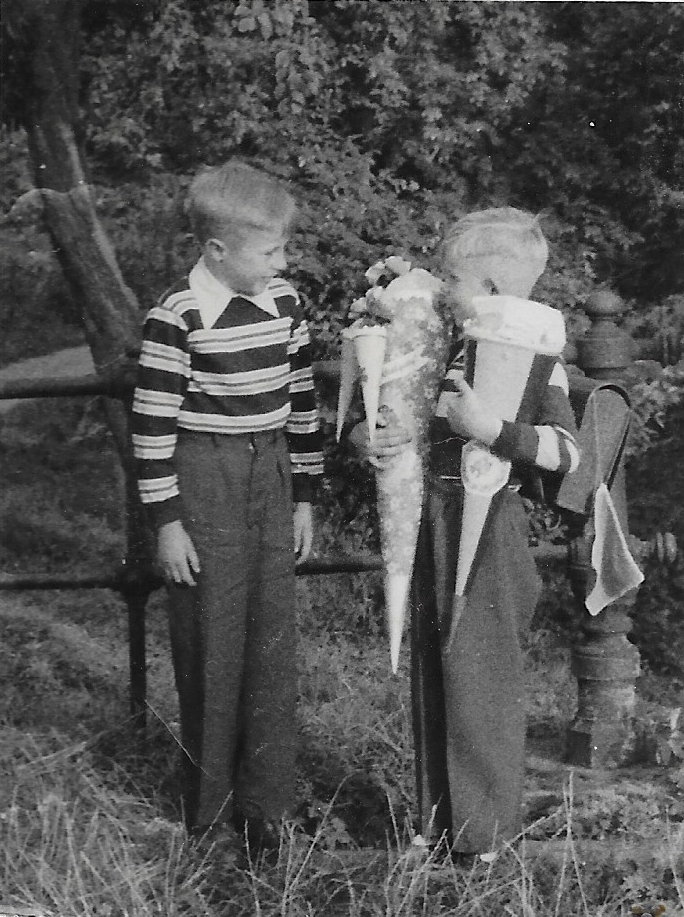 The Artist on his first day of school

He could not wait till the day came to go to school. To the left is of his older brother and the Artist's first day at school holding the Zucker Tüten, which every child receives on their first day of School. 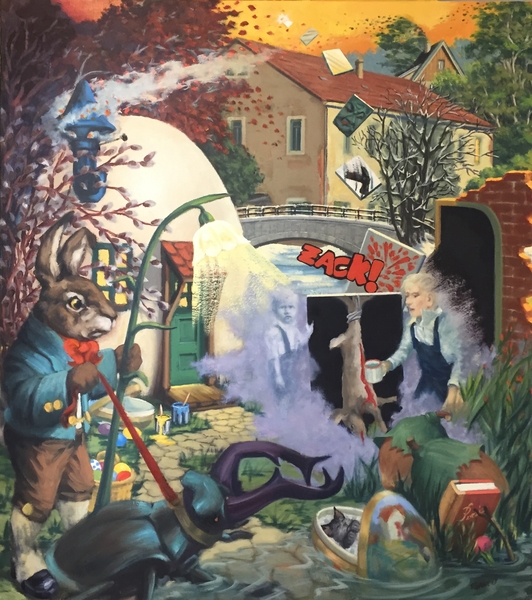 Josef-Peter liked to draw as a child,  in East Germany one of his favorites was drawing a Easter scene where the Easter rabbit lived in a large Egg shell with a chimney, smoke coming out.  One of his paintings reflects that theme.

It shows his Home, the Easter egg House and Josef-Peter coming through "The Time Portal".  Along with the Easter Rabbit with his Bug that is native to the area,  he exaggerated the size of the bug.

The little Kitten in the cardboard egg by the stream was a little Tike that died the week he was working this painting, so he included the kitty.

The small book on the right is called a Posie, when you are moving away from all your friends and relatives in East Germany (DDR) each person writes a small poem, maybe draws a small picture and dates it sort of  a good bye saying.  The house in the upper part of the background is where his girl friend lives, Gisela Mohn, she inherited the house and still lives in the same house with her husband.


In 1955 his grandmother brought him to West Germany where his mother was living.  His mother was getting married to a US Soldier, and the artist was going to be adopted along with his older brother. From there they went to the United States, the first state they lived in was Tacoma, Washington.

There he went to Roosevelt Elementary School he had to repeat the 3rd grade because he could not speak English.  Moving from Tacoma to Stay with his Aunt for one Year in Lynn, Massachusetts, his mother and step father who was in the Army, was stationed back to Germany.  There in Lynn he was in 4th grade,  his uncle Jim Sharpe made Josef-Peter a shoe shine box, that is how he got started shinning shoes in town on weekends.

In 1957 he and his brother who was also staying with his Aunt went back to Germany to be with his parents,  who were living in military quarters Käfertal, Mannheim and attended School on the Military base called Benjamin Franklin Village. 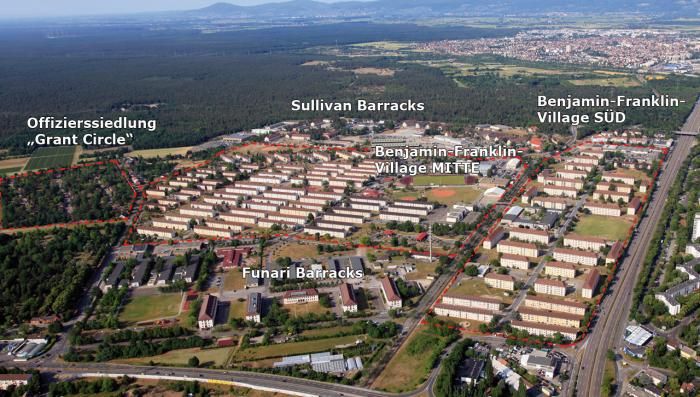 In 1960 his step father was being stationed at Ft. Hood Texas, so the move was on, back to the USA.  To Killeen, Texas, and then to Copperas Cove, Texas where Josef-Peter Römer's family had a new house built in 1961. 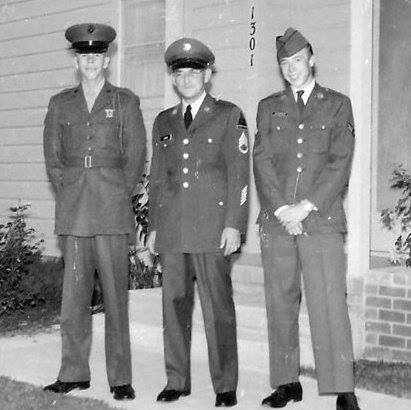 In 1963 Josef-Peter  was going to Copperas Cove High school, he was in his freshman year   and bored with school and decided to quit.  For a while he worked as a roofer, then at a grocery store, neither was what he liked, so since his family was all military he decided to join also.  His step-father was a career Army man, his older brother Jürgen was in the Air Force, so Josef-Peter decided to join the United States Marine Corps.

Left is a Photo made when Josef-Peter came home on Boot Leave in November 1963.

Of his Four year enlistment he spent 36 months overseas in the Far East, Okinawa, Philippines, Japan, and Vietnam. 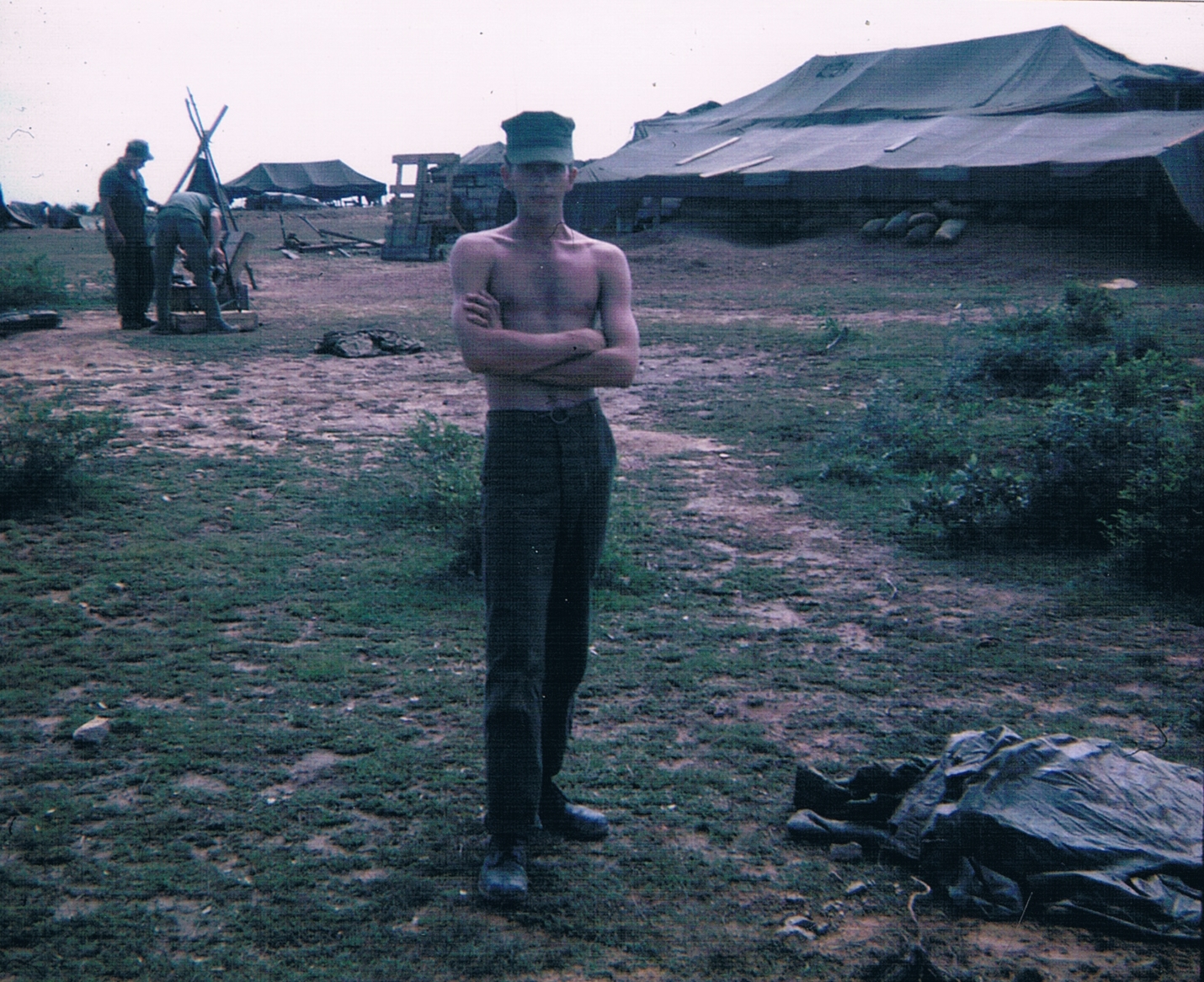 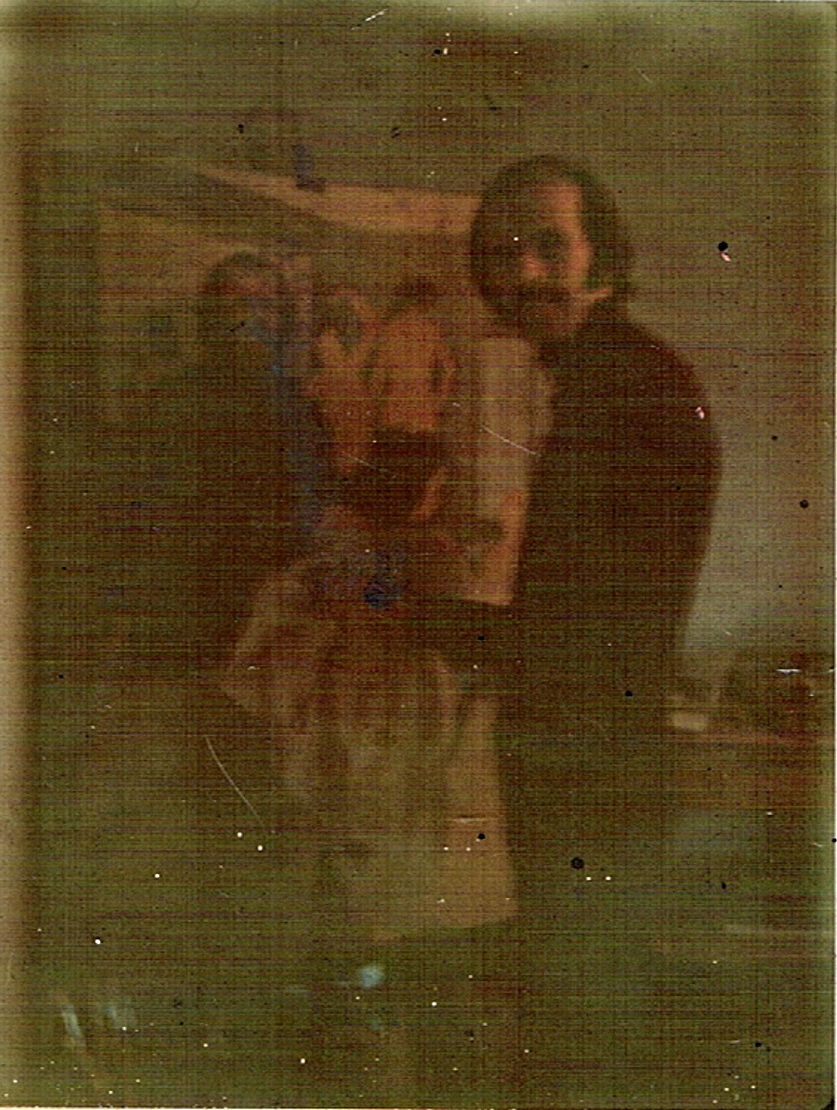 This is Josef-Peter Römer  in 1974 while a
Junior at The Evergreen State College. 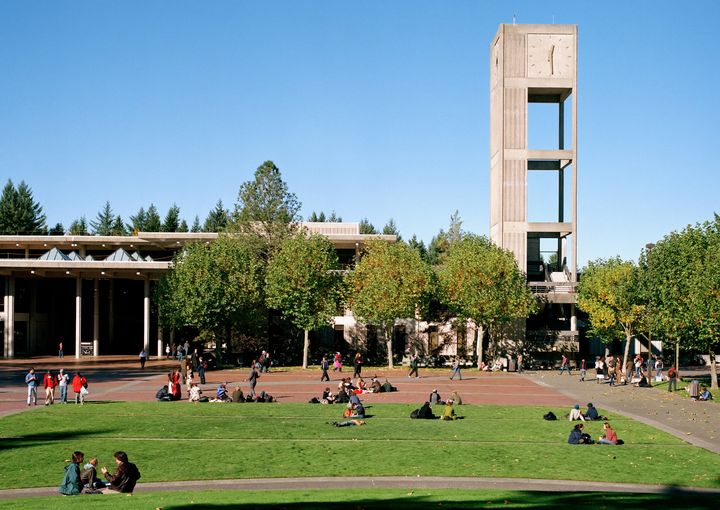 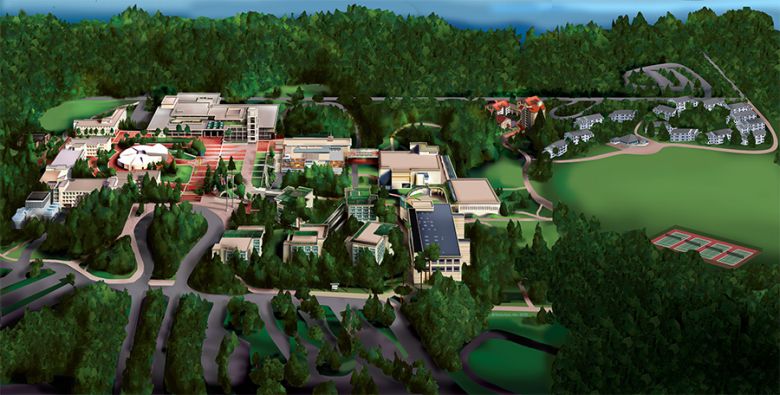 In the 70's and 80's Josef-Peter was painting Cityscapes, the scenes were all local of Tacoma, Washington in th Industrial area called tide-Flats, and a few Landscapes one of the Olympia Area. The early paintings sold well, but it was not what he really wanted to paint. 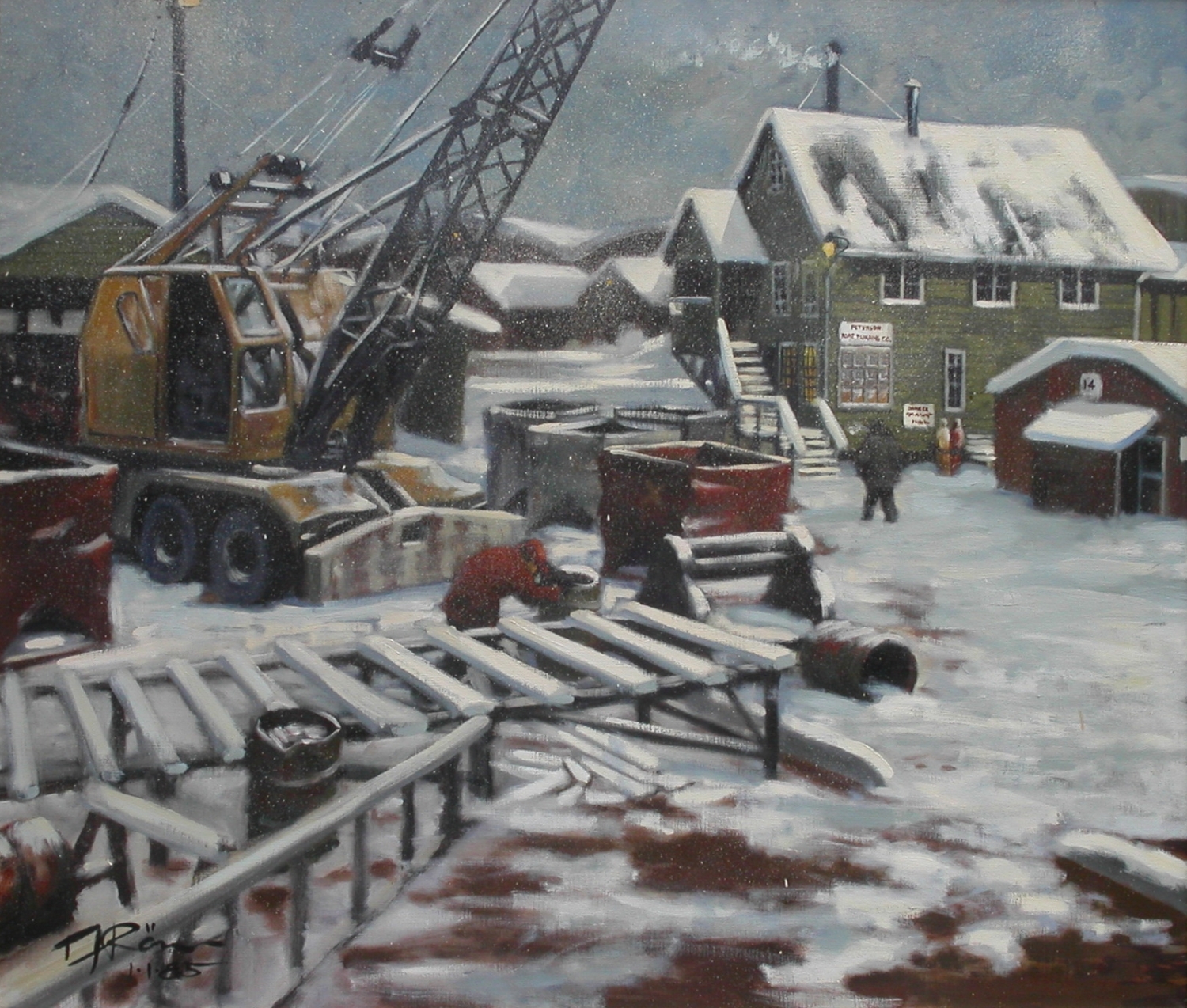 One scene the Peterson boat Building Company that had gone out of business was one that Josef-peter really liked, sold right after it was completed to an Engineering Company Near Renton Washington.  The buildings no longer exist. 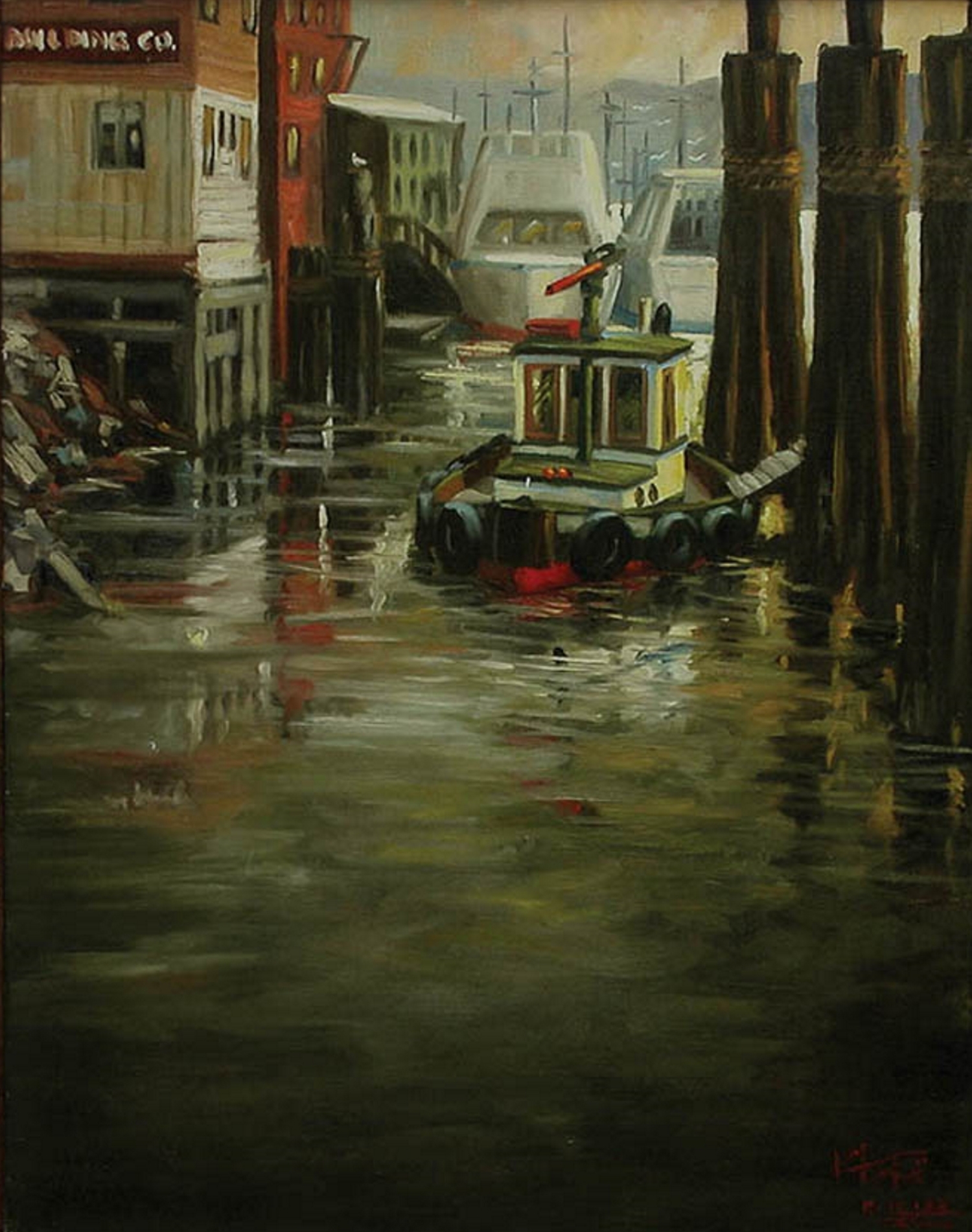 
Another of his Favorite scenes he painted was "Foss Tug Boat", also in the Tide-Flats.

In 1988 Josef-Peter entered a painting he just completed at the State Fair, the largest art competition in the State.  He won First place with his painting of "Magic to a Child" 58" x  64".  One of his idols was the Artist Thomas Hart Benton, Josef-Peter was influenced by this artist in his new style, the painting sold right away before the Exhibit was finished.  But that was it for this new style,  he tried other paintings in that style but no one was interested.

The partial painting on the left in the photo with the Red Ribbon was a painting he entered in a competition at the Olympia Art Museum in Olympia, Washington and it won second place. 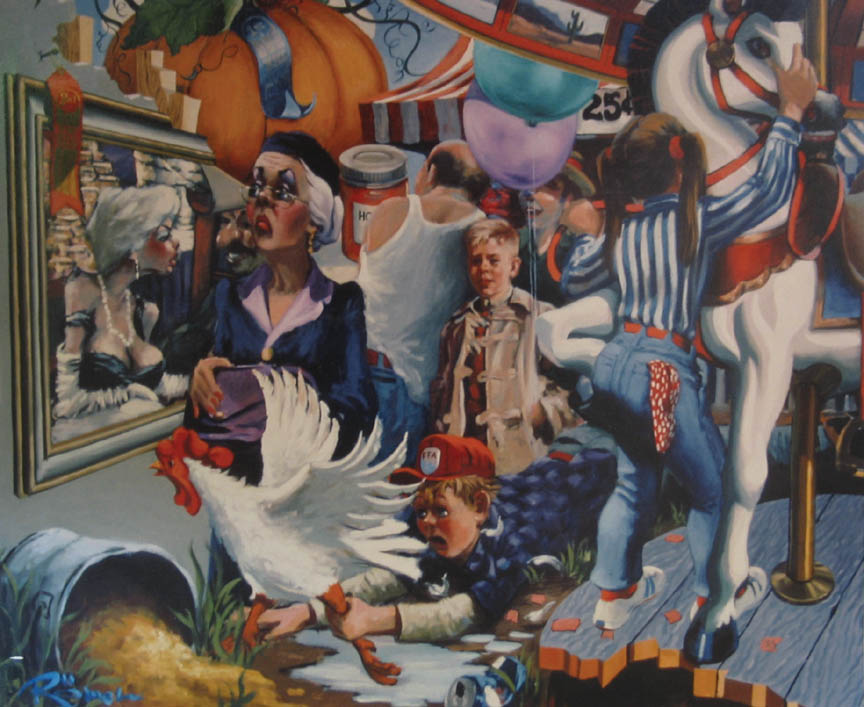 Magic to a Child

From this point on, He was now more into Figurative paintings, instead of City and Land Scapes, the painting below "Washington Plaza 34" x 48" was donated for a good cause and auctioned off. 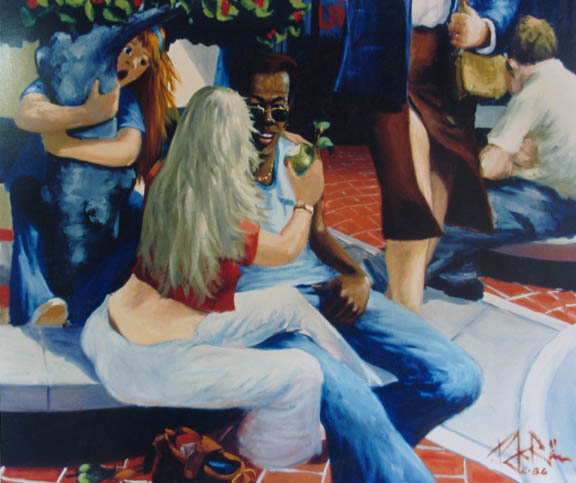 In 1989 he went to Europe for approximately for 10 years, working
as a Designer for Theme Parks and apprenticing in Sculpting with Mr. Ludwig Seibert. Upon returning to the USA he ended up in Southern California and opened an Art Studio. 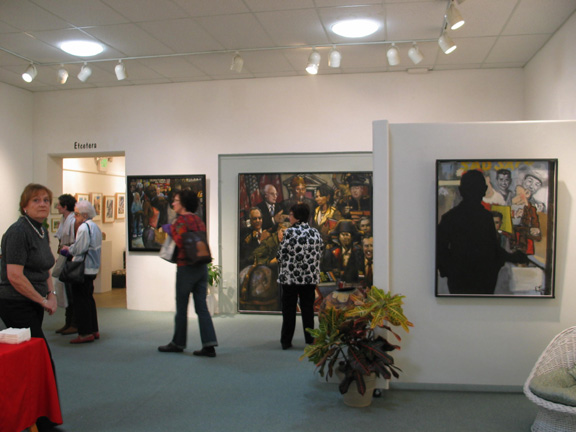 In 2007 he graduated from Warnborough College with an MFA degree in painting.  He had a One person MFA exhibit at the Brandon Art Gallery Fallbrook, California for part of his requirement for Graduation from Feb. 3rd to Feb. 28th., 2007. A few of the photo's are shown below.

Not long after the exhibit Josef-Peter returned to Germany on a one year contract to do design work for an Amusement Park.  Returning to the USA he ended up in Santa Rosa, California working for a company as a Creative Director. 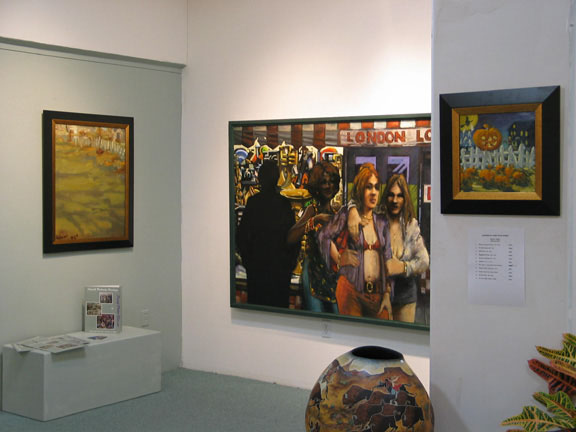 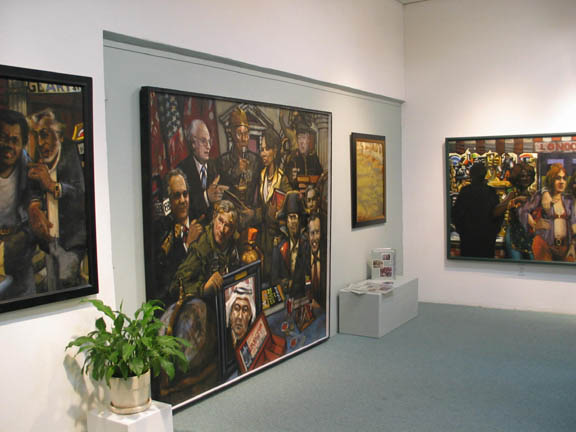 In 2010 he moved from Santa Rosa, California to the State of Wisconsin, where he opened his Studio and continues to paint.

This is his short story on how he arrived at how he paints
at the present time. Due to being better informed he also includes some political aspects in his paintings.
Some of the artists he admires are Thomas Hart Benton, Jack Levine, Bernhard Heisig, Neo Rauch, Johannes Heisig. and Pieter Bruegel the Elder.